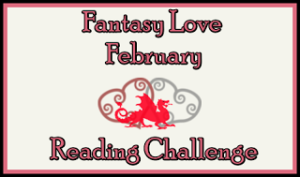 The mini-challenge of the third week of the Fantasy Love February Reading Challenge is to read an original fairy tale (Grimm… Hans Christian Anderson…) and then to answer the following questions. (Ooh, I like this one. :))

I’ve read most of the “classic” ones, and was at a loss as to which fairy tale to read (especially since I figured I’d be tempted to pick The Twelve Dancing Princesses, as my favorite… but I’ve already read every version of that I can find, so…), but I remembered that awhile back I’d been in the middle of reading through a collection called “The World’s Best Fairy Tales“, and hadn’t finished. So I pulled it from my shelf and opened it where I’d left off…

1. What fairy tale did you read?

The Tinderbox (Hans Christian Anderson; the book said it was from the Andrew Lang collection). It’s the one about the soldier, the tinderbox (naturally), the princess, and the three dogs with the interestingly large eyes… (Teacups, saucers, and millstones or towers were I believe the operative words…) It sort of sticks in your mind once you’ve read it!

I’d say so. It’s kind of odd, as many fairytales are, but I vaguely recall a shortened, illustrated version of it from a collection of children’s tales and verse, which I remember I loved. It has some similarities to a few other fairy tales, like perhaps Aladdin and his lamp, though obviously I — as a person mildly interested with The Twelve Dancing Princesses — ended up noticing that it has a slight resemblance to that… opening with a soldier meeting an old woman, and having an underground place with an emphasis on three areas and having copper, silver, and gold, and a princess who her parent(s) are worried about going out at night. …Okay, so maybe I’m over-thinking it. 😉 Anyways, it’s a short tale, and interesting, with an occasional amusing turn of phrase. I’m not the biggest fan of Anderson, and some of it’s… weird… but still pretty fun. 🙂

If there is, I haven’t seen it… 😛 And I think it would make an odd movie! There’s kind of not that much to it? But I supposed all adaptions of fairy tales manage to build more on the story than was originally there…

4. Is this the first original fairy tale you’ve read?

5. Do you want to read any more original tales now?

Yes, I hope to read many more in the future! Fairy tales are fascinating. 🙂

In case you can’t tell, I’m having a lot of fun being a part of these Fantasy Love February challenges. 😀

If I'm never seen again, Rhys killed me for #googlyeyedbooks -ing him. 😅 Swipe for pretty version. 😂
I got to meet @ebdawsonwriting on a roadtrip recently! 😱😍
📖Do you collect anything?📖 I'm excited to rep this journal and lip balm for @shepherdssongcreations! 😍
I'm back from hiatus! Where are my audiobook fans at?
What's a book/series you get an itch to read when fall hits? The Dalemark series is one for me!
Sale heads-up! This steampunk fantasy novella collection by one of my fave authors is 99 cents on Kindle through Oct. 14! Link in my bio.
Happy release day to Cranberry Bog Crumble by @sparrow_lina! 🎉 These books always make me so hungry when I copyedit them--so much magical food! Scrumptious pies, delicious fall vibes, and fae!
I'm excited to help share the #CoverReveal for THE WINDWARD KING by @ktivanrest -- releasing October 29! (Preorder link in my bio!)
New theme! Happy fall! Happy Hobbit Day!