Welcome to my stop on the blog tour for Jamie Foley’s latest book, Sage! I’m SO excited! 😀

Read on for my review, and don’t forget to scroll to the end to check out the giveaway and other tour stops! ^_^ 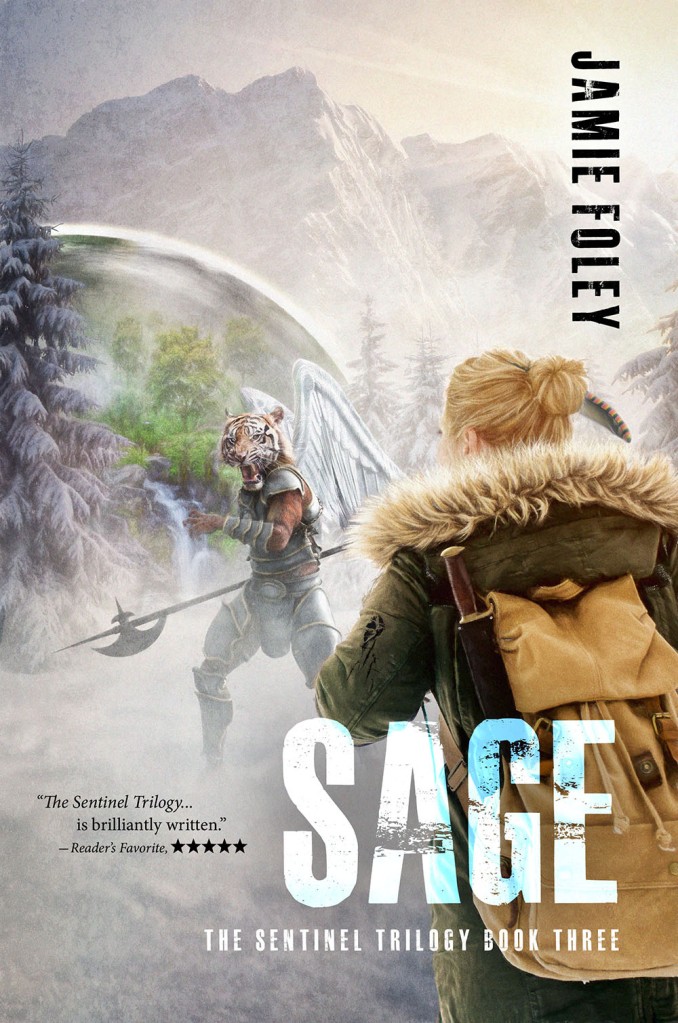 It’s really hard to review the final book in a trilogy without spoilers, as I’ve mentioned before; try “almost impossible” with this one! O_O My word. But I’ll do my best. It just may be slightly vague…

THIS BOOK WAS SO GOOD THOUGH. I’m always nervous coming into the final book in a series, because WHAT’S GOING TO HAPPEN TO MY PRECIOUS FRIENDS? It’s the finale, and stakes are high, and is it going to live up to the previous books, and what will the ending be like? And the first two books were ALREADY so intense. O_O But Sage absolutely lived up to and surpassed all the expectations. There were HUGE things going down, and some major twists (like… meep!), but it was all gloriously epic and exciting, and still just FUN on the side, and I love the characters and IT WAS GREAT.

I’M JUST VERY HAPPY WITH THIS SERIES. It can get a little intense or weird sometimes, and occasionally all the fantasy elements can confuse me (with elements and archangels and aaall the fascinating complexity) but I think I have it down now. This is such a fun, exciting, well-written fantasy-post-apocalypse-in-another-world kind of series, and the characters are some of my FAVORITES, and I just love these boooooks! *flails around*

I can’t really say anything about the plot of this third book, especially for anyone who hasn’t read Arbiter yet. (So many huge spoilers in that, not to mention this one…) I’ll just say that it’s just as exciting and intense as the first two books, but with sweet moments and TWISTS, and character banter thrown in—because what’s the end of the world without some snark?

Speaking of snark, there is still MUCH of that, and the dialog makes me grin, and the character interactions are priceless—sheer gold, I tell you. ❤ Not to mention this book having seriously EVERYTHING, including rebellions and escapes and fights in arenas and shapeshifters and a modern-but-fantasy-but-futuristic feel, and all the awesome Aether abilities/powers (so fascinating), and all of it!

I JUST LOVE THESE CHARACTERS SO MUCH, OKAY. Again, I really can’t talk about what’s going on with them, but I love Darien, and Jet (!!), and Sorvashti, and Tera, and a certain snarky fox (so fun!), and Kohesh cracks me up (oh my goodness! XD), and there’s a CERTAIN OTHER CHARACTER I LOVE who I can’t talk about because of so many spoilers, my goodness. But if you’ve read Arbiter you mayyy have a slight idea about who he is, and I love him! 😀 His character arc is the. best. ^_^ (But Jet though. Jet is my absolute FAVE.)

I love how Darien, Jet, Sorvashti, Tera, and said-unnameable character (and Aleah, I suppose), are all coming so far and learning/growing so MUCH and just—let me hug them! ❤ And I still love Darien and Jet’s buddy-not-buddy, apprentice/mentor sort of roles, and how far they’ve come, but how they’re still the same despite it all, in their own way. THEY MAKE MY HEART HAPPY.

Speaking of characters and my heart being happy, there’s an absolutely ADORABLE romance or two or three, which, again, I cannot discuss. SO MANY SPOILERS. Gaah. But I love-love-love these couples. 😀 There is so much adorableness, it just knocks me over. I CAN’T.

There are a couple things I wasn’t sure if I’d be okay with, but… you know… I think I’m good with it? I ended up quite satisfied on pretty much every count. 😀 (I think I randomly wanted more of Thracian and he was hardly in it, but that’s okay I guess. And more of Jet’s POV, but I always do, so I’ll stop now. XD) And it’s kinda intense and might be better for older teens? (Really bad at age recommendations, here.) But honestly I have no actual complaints. I really enjoyed it!

Overall, it’s an EXCELLENT young adult fantasy series and is SO UNIQUE (like seriously, how unique can you get? I don’t even know how to classify its genres…) and I love it to bits. This author is so absurdly talented, and the characters and snark and fantasy-thriller-ness are gold. If you haven’t, I highly recommend checking out the first book, Sentinel!

(And if you’ve read Sage, please talk to me because I MUST DISCUSS SPOILERS BEFORE I BURST. Message me or leave a spoiler-tagged comment or something. XD)

Some Favorite Quotes (Do you know how hard it is to get non-spoiler quotes? VERY HARD. But these are a few…)

Step four: return to Altair and find any survivors. And try not to let Jet kill me.

“You’re not teaching her because you think the way she talks is cute.”

Tera laughed out loud. “So I was right!”

“So we have an understanding, then.”

“Your moping is like nails on the blackboard of my soul.”

Jet breathed like a bull. “You have three seconds before I throw you out the back hatch.”

“All of the spice.” Sorvashti crossed her legs. “None of the poison.”

Jet leaned over the map. “Give her all my spice.”

“I was planning on walking purposefully.”

“You look super broken up about it.”

How do you turn your stupid spear on?

Ancient elementals awaken, fracturing a dying world to its core.

Teravyn Aetherswift returns to the land of the living, but everything seems unfamiliar… including her little brother. Zekk offers help, but can an alluring Lynx be trusted?

Sorvashti finally has everything she ever wanted, so the last thing she wants to do is run after traitors. But she won’t leave Jet’s side—unless the horrifying truth about his mother tears them apart.

Darien is sick of being used and lied to. But if he stands up for what’s right, he’ll pay the price with his life… or the lives of those he loves.

Purchase on Amazon or a signed paperback

Check out the rest of the series! 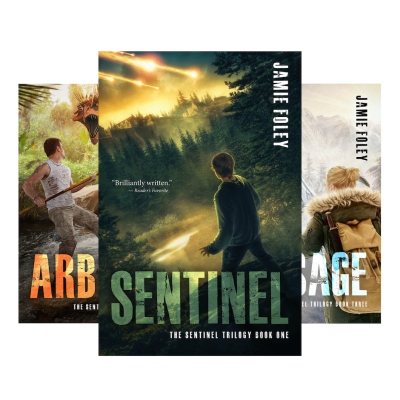 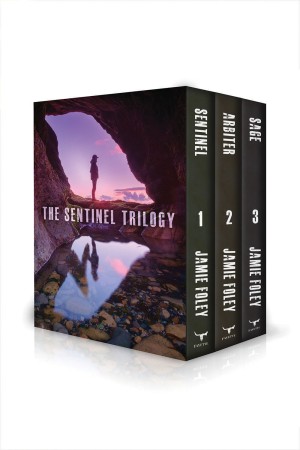 When a meteor storm knocks out the power grid, the supernaturally gifted become pawns in humanity’s struggle for survival.

The Sentinel Trilogy is an apocalyptic fantasy series that takes place on a unique world with ancient powers and elementals, but familiar human struggle.

Her husband is her manly cowboy astronaut muse. They live between Austin, TX and their family cattle ranch, where their hyperactive spawnling and wolfpack can run free.

Want to dive into a new world or in need of a good book? Enter to win a digital $10 Amazon gift card (3 winners) by signing up for Jamie’s newsletter via the form.

Have you checked out this series yet? Because I totally recommend it! (If you can’t tell. XD)

You can read my reviews for the first two books in the series (as well as the prequel novella, Viper/Vanguard) by clicking the covers below…

Well, that made it to my top-five favorite books of all time! Jayden and Dana are some of my favorite characters EVER.
What's your favorite superhero movie?
My top 14 (ish) favorite books I read in 2020! Guess who finally posted a blog post about this today? February is totally still the right time for a yearly recap, right? 😅
Shoutout to some amazing books I've copyedited (lower shelf) and some of my favorite books on writing (top shelf)!
Do you like Celtic/Irish books? I adore them so I'm super excited for "Pangur Bán, the White Cat" which is (re) releasing March 16!
Part 3: How To Make A Deal With An Ice Queen is up today! This is the first episode of my urban fantasy serial story that has NEVER BEEN POSTED before on my blog!
Top favorite novellas of 2020, and honorable mention novels!
No caption today, just a Tolkien book. 💚
Eeeeep! 😍 I'm excited to join in the #coverreveal of Secrets in the Mist by @morganlbusse releasing from @enclavepublishing in August 2021! (Swipe for a closer look.)