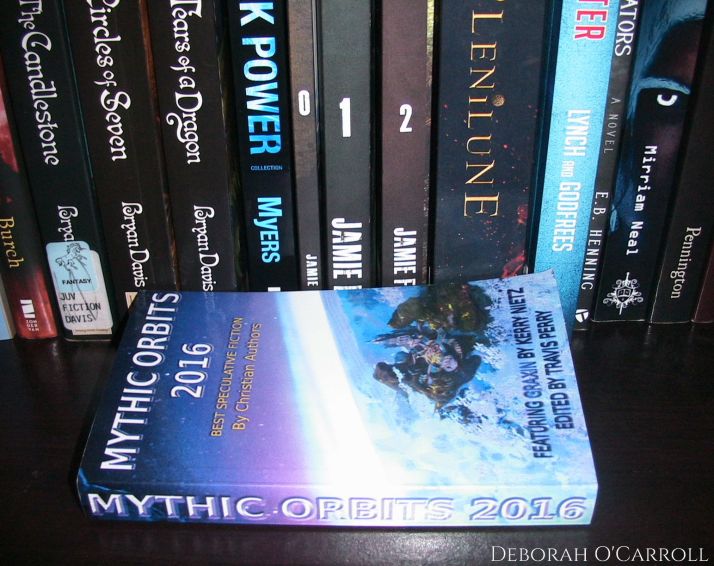 I don’t think this is a collection I would have picked up on my own, but I met a wonderful author, Lisa Godfrees, who has a story in this collection, at a writer workshop event, and she was kind enough to give me a copy. It looked like something very different from my previous experience, so I curiously dived in. (I WAS warned that they were dark stories, but I pressed on all the same. :P)

This anthology contains 14 short stories by various authors, as well as an excellent Editor’s Introduction by Travis Perry. The stories were nearly all well-written, gripping, and fascinating—I breezed quickly through them and couldn’t stop. They were also mostly dark, disturbing, or creepy as well—or at least in genres I don’t usually read—which is not my usual cup of tea. XD

I don’t read many short stories, and I also don’t usually read Sci-fi, Paranormal, or Horror, which is where some of the stories in this collection fall, so I don’t think I’m exactly the proper audience to review this? Though some are also Fantasy, Contemporary Fantasy, Time Travel, or have Christian or allegorical elements. The point of the collection was to have varying stories that fall broadly under the Speculative Fiction label, written by various skilled Christian authors, published in 2016. You won’t happen to find language or inappropriate situations in here, but most of the stories happened to be pretty dark and creepy, as it turned out. 😛

It was definitely an interesting read, and I liked some of the stories, but most of them were not, overall, for me. I’m rounding the total collection rating to 2.5 stars… some were more or less. Below is a rundown of the contents of this anthology, with my brief thoughts on each.

A young woman in our time finds a cameo necklace, and when she dreams, she seems to—impossibly—go back in time and visit the girl the necklace belonged to, who needs help… This one was super fascinating and I was SO WORRIED about what would happen, but it turned out to be my absolute favorite in the collection. 🙂 The time-travel was really well done and I really liked the characters and the mystery and just… yes. I really, really enjoyed it. 🙂 Some of it was still very creepy, but not as much as it looked like at first. Anyways, I liked. ^_^

So, I LOVED this one for most of it. 😀 It’s well-written, humorous, and fascinating. What if tooth-fairies are made up but there are actually creatures like them, just… different—namely Dental Trolls? A little girl meets one. I thought I was going to love it, but the ending took a turn for the creepy/dark/horrifying and just… no. o.o So I’m taking a star off for that. I mostly loved it, especially the writing and humor and idea, but I didn’t care for this ending, personally. XD

Okay, so this one was definitely unique. 😀 A pirate ship with scary fairy-ish beings is stealing cars in a modern-day city, and a no-nonsense mother decides to get her car back (because it has her son’s doll in it), researching how to deal with fairies, and meeting a strange guy in a trench-coat who I quite liked. It gets points for all the fairy-lore references, in a modern-day setting, with creepy fairy-pirates etc. Some of it was weird, especially the ending, so I’m not totally sure how I feel about it, but it was definitely mostly fun to read about—extra points because of The Tempest reference. XD

A Model of Decorum – by Cindy Emmet Smith

So… this one was kind of… werewolf-ish. *twitch* Which I don’t usually care for. But it was also kind of a Little-Red-Riding-Hood retelling, and was well-written and interesting and I couldn’t help liking most of it, for some reason. XD But it’s still werewolves, which is kind of creepy for me… but I liked it more than some. 🙂 And it just takes a lot for me to like something I normally wouldn’t, so I’m impressed. XD

Even though I don’t really care for stories featuring ghosts, I was super surprised by really enjoying a lot of this. XD It was FUNNY, and I dearly like funny things. It started getting a little weird and then ended at a quite dark/creepy (but also vague?) point, so… it’s probably 3.5, rounding to 3, because I quite liked some of it, but the ending was… um… yeah, no. >.>

WELL. That was fascinating and rather eerie and also confusing. It’s in a fantasy-world and it kept me interested but I was also confused about the different groups and couldn’t figure out what happened at the end and if it was happy or not. So. That makes me a little twitchy. I don’t know what I thought! o.o

I don’t do well with sci-fi? Sorry, but it’s true. XD This was about an intelligent robot, featured some chess-games with an old priest, a dog, and some questions of robots and God. It was interesting for sure, but again, just… I’m not totally into sci-fi. 😛

The Water Man – by Sherry Rossman

This was almost written in a sort of code, which I didn’t totally get till the end. It was interesting, set in an old-folks home, from the point of view of an old man; it’s kind of dark, with a murder mystery sort of thing, and I’m torn on what to think of the ending. Dunno. I think I liked some of it and it was well-written and interesting, just it was super creepy and not… totally… for me.

This one was actually super-well written and fascinating—set on some planet’s moon, about a robot searching for a kind of ore, and finding… something mysterious instead. It was intriguing and I felt like it was trying to say some interesting stuff, but I just don’t connect well with sci-fi and the ending was… kinda strange. I think I was rooting for him, but… still… ACK, I don’t know. I can’t decide what I thought about this one.

The Disembodied Hand – by Jill Domschot

This one had some interesting bits (maybe an angel?) and was intriguing but kind of confusingly written. I don’t know. It was fine but not my thing.

Okay, so I’m torn. This was the longest story in the collection, and it had me positively hooked. It was super fascinating, original, and unique. It’s kind of like a post-apocalyptic sci-fi place with squids and mines and scientists with creepy-creepy secrets, and elements of a mystery and of residual Christian stuff. It was well-written and I couldn’t stop reading but it was just super-super creepy and just… Nope. Not my thing at all. So I’m torn because in a sense it was really good, and it even had a fairly-good ending, but for me personally, it was too horrifying. O.o Meep. Others might enjoy it, though.

This is more a “what?” than an “absolutely nope,” but still. I had no idea what the point of this story was, and I think it turned out to be sci-fi but… I’m not even sure. It was weird and confusing and I didn’t understand it until the end (so I’m not going to say because it might be a spoiler but I don’t know) and then I wondered what the point was? Perhaps I’m missing something. Just kind of disturbing and not that interesting for me.

On a space-ship (or two), following a criminal who is more than he seems at first, with a couple of alien creatures. Mixing sci-fi and paranormal, this just… was not my thing. It was okay but kind of creepy. I was intrigued but I don’t care about sci-fi and I’m not a super fan of following the point-of-view of such a creepy person? Other people might like it, but… not me.

Absolutely least-favorite in the collection, this was positively horrifying and I wish I hadn’t read it. I simply don’t do horror like this. Just. No. WHY. Far too creepy for me.

Overall, an interesting experience! I think it’s just me personally who didn’t like some of these, or “get” them. If they intrigue you at all, and if you don’t mind a bit of darkness/weirdness, you might find a story or several to enjoy in this collection. And I did enjoy a few. 🙂

(I was given a free copy of this book by one of the authors, and was not required to write a review. These are, naturally, my own opinions.)