Hey, so for those of you out there who are fans of The Beast of Talesend and Kyle Robert Shultz’s other delightful works of hilarious fantasy fiction, I just want to share a sale with you! Because FREE BOOK!

(And to explain what’s up with the Beaumont and Beasley series, in case you’re confused by what this book actually is. XD) 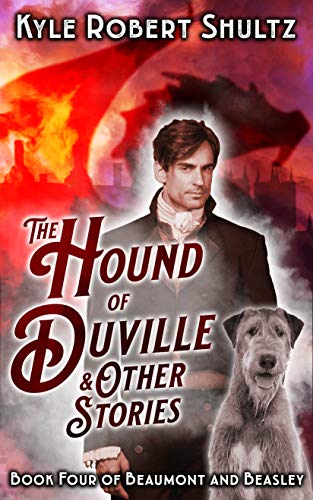 Free: The Hound of Duville and Other Stories (Beaumont and Beasley, #4)

First, link: heeere it is. Free through June 16. Go download it! (Got it? Excellent.)

As the Editor of the Afterverse, I just wanted to give a shout-out!

(Oh, and Kyle’s nonfiction book on writing, titled Not Write Now, is free too! It’s perfect if you’re into writing and hilarity and reverse-psychology, because it’s going to totally inspire you in your writing, while telling you NOT to write. It totally works. And chapter 2 even has Nick and Cordelia in it. Just so you know.)

Now, what is this Hound of Duville and Other Stories, you ask?

Once upon a time . . . there was The Beast of Talesend, The Tomb of the Sea Witch, and The Stroke of Eleven. (Click titles for my reviews.) These make up the first three books in the Beaumont and Beasley series, about Beast detective Nick Beasley, his awesome/funny brother Crispin, and the inimitable and eccentric young enchantress Cordelia Beaumont. 1920s magical fairytale retellings. Hilarious. Awesome. And so forth. (There’s a new omnibus edition of the first three if you need to catch up.)

And then there were a smattering of other, smaller stories, released over the last year or two, on various platforms, which are combined as book 4, which is the book that is free this weekend.

The Janus Elixir — a prequel novella of sorts, following fan-favorite archaeologist dragon Malcolm Blackfire (who’s going to have his own series), taking place in the 1800s, with some Jekyll-and-Hyde shenanigans.

The Hound of Duville — occurs a few months after The Stroke of Eleven (book 3), and is a novella featuring Nick and Crispin and a doggy curse.

These were published individually, then combined into The Return of Beaumont and Beasley, labeled book 4.

This has now been re-released under the title The Hound of Duville and Other Stories (as Beaumont and Beasley, #4), with these two novellas and the new addition of three other short stories, to make it more of an anthology.

All three short stories feature the Beaumont and Beasley characters, take place after book 3, and are:

Got it? Two novellas, three short stories, all awesome, all in one collection, which is free through June 16. You MAY have read some of them in various forms over time, so I just wanted y’all to know about all this! You can read Kyle’s post here, but he wanted to put it up for free for a few days due to some people perhaps already having other versions. (And the new paperback is also discounted.)

Also, book 5 is coming, promise! It’s called The Geppetto Codex and will be out later this year.

In the meantime, the next Afterverse book is Deadwood (magical wild-west spinoff series Crockett and Crane, #2), releasing June 30 and up for pre-order!

OKAY. I think that’s all you need to know. I hope you found this Afterverse recap/update helpful — or at least the freebie sales. XD Enjoy!