Look! Birdie seems to be singing a dinosaur through a hedge! (Creation Evidence Museum) #SongofLeiraContest

I’m back on the Song of Leira release blog tour to share my review! And also some snazzy photos I took for Gillian’s Take Your Book on an Adventure photo contest (details at the end of this post — but it ends in just a couple of days, so be sure to get in on it!).

I took Song of Leira on an adventure to the Creation Evidence Museum, and the Dinosaur Valley State Park with dinosaur footprints in the riverbed (both in Glen Rose, TX), so that’s where these pictures scattered through the post are from!

(There mayyy not be dinosaurs, exactly, in this book, but there are definitely some big scary critters, so close enough!)

Enjoy the pics and review, and thanks for reading. ^_^

There’s some kind of beastie footprint down where Birdie sang the water away! (Dinosaur Valley State Park) #SongofLeiraContest

The sweeping, epic conclusion to the Songkeeper Chronicles trilogy, SONG OF LEIRA far exceeded my expectations and does not disappoint! AAHH! My heart is so full. ^_^ *hugs book* I’m not using “epic” lightly—it really is that.

I haven’t read a book with such overwhelming hope in a long time. Yes, there’s darkness and war and death and sorrow, but in the midst of it, the light and the Song pour out hope and peace and strength. It’s full of those times when you feel like everything’s lost, but then there are moments of eucatastrophe and those good surprises (particularly near the end!) that make everything right.

After the darkness and shattering despair of the dark-before-the-dawn middle of the series, Songkeeper, I was worried this final installment wouldn’t live up to my hopes, but it rallied and brought me soaring through the conclusion on wings of exhilaration like a griffin. 😀 Twice, SONG OF LEIRA had tears pricking my eyes—at a certain death (still broken up over that one, though at least there was peace and purpose to it) and reading the beautiful final paragraphs of the novel. It’s heartbreaking and beautiful all at once, and still dark much of the time (there are a few side characters I could have wished survived), but the overall feeling I came away with was hope and joy. 🙂 It just stirred my soul so much. ❤

The book started out a little quietly but it soon pulled me in and swept me away on the adventure. We’re in the mountains in this one, with Ky and the runners of the Underground, Birdie and the griffin, and many other characters we meet along the way, both friends and enemies, new and old, and so many places… but I don’t want to give anything away! The world is so vivid and I love it. ^_^

I also loved following Birdie and Ky on their journeys, as they fall and get up again over and over—as they doubt and find their way, and make mistakes and grow and learn, and become so much more than they could have imagined. Becoming heroes worthy of legend and song. And Gundhrold the griffin and Amos and—gaah, I love them all! There are new characters too—I particularly love Frey, the beast from the cover!

Is it the River of Song? (Dinosaur Valley State Park) #SongofLeiraContest

All the characters are so HUMAN (I mean… except for the actual non-human characters. *cough* But you know what I mean!) and we bleed and struggle and triumph along with these broken but determined souls. I love them so much! ^_^ These are definitely some characters who’ve wrapped themselves around my heart. (Yes, including Cade. He may be arrogant at times, but I still love him! He wasn’t in it much, but I was so glad he got to come in near the end like that! 😀 He’s still one of my favorites despite everything, and I will not apologize. 😛 CADE.) Even the villains are written in such a compelling way that they seem human too. There was one in particular I hoped for a better ending for, but… ah well.

Another thing I found delightful was the Song and what the Songkeeper can do—it was such a unique thing and made me love this fantasy world even more! A unique “magic system” for lack of a better term (gift?) helps set apart a fantastic series from a merely good one. I just love all the stuff about the Song, and it was wonderful to see Birdie come into her own at last! Also her humility in not taking the credit to herself but pointing it back to the Master Singer. Christian fantasy done absolutely RIGHT. ❤

Some of it can also be fun, too! The little moments of humor or wonder made my day. ^_^ The writing, too, is gorgeous—effortlessly drawing the reader along and painting everything so vividly, in soul-stirring moments of near-poetry at times. Gillian Bronte Adams is definitely a talented author, and this is her best book yet. (Sometimes I was reminded of another of my favorites, Lloyd Alexander, at his best—which is high praise from me. :))

The plot was exciting too! It brings so many threads together from throughout the trilogy and ties most of them together so that everything falls in place in an utterly right and satisfying way. I’m not going to spoil anything, but WOW. That ending! So epic and thrilling! (And I got a slight Arthurian vibe, which is always welcome. ;))

SONG OF LEIRA is a breathtaking, fulfilling, and so rewarding conclusion to what has been a beautiful journey of a fantasy trilogy, masterfully penned and threading its way through my heart.

It brings you through the darkest shadows of night and on to the glorious rays of dawn.

This—THIS—is what epic fantasy with echoes of truth is meant to be. 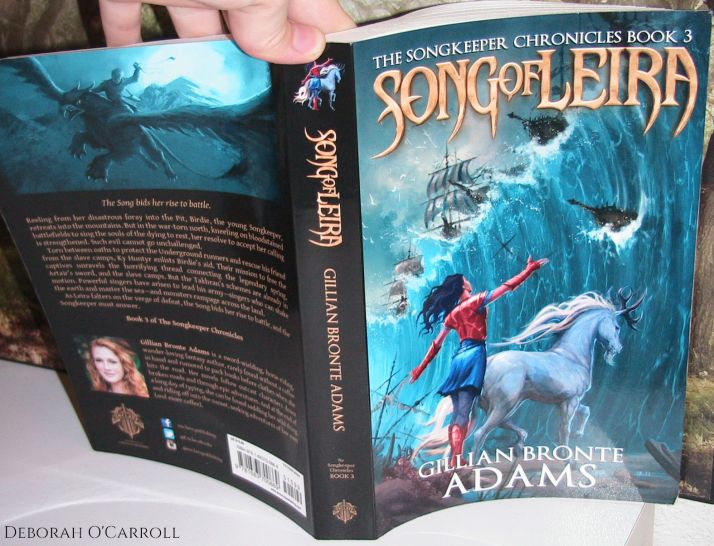 The Song bids her rise to battle.

Reeling from her disastrous foray into the Pit, Birdie, the young Songkeeper, retreats into the mountains. But in the war-torn north, kneeling on bloodstained battlefields to sing the souls of the dying to rest, her resolve to accept her calling is strengthened. Such evil cannot go unchallenged.

Torn between oaths to protect the Underground runners and to rescue his friend from the slave camps, Ky Huntyr enlists Birdie’s aid. Their mission to free the captives unravels the horrifying thread connecting the legendary spring, Artair’s sword, and the slave camps. But the Takhran’s schemes are already in motion. Powerful singers have arisen to lead his army – singers who can shake the earth and master the sea – and monsters rampage across the land.

As Leira falters on the verge of defeat, the Song bids her rise to battle, and the Songkeeper must answer.

Add Song of Leira to your Goodreads Shelf

NEED TO CATCH UP ON THE SERIES?

Orphan’s Song (Book 1) Her solo is a death sentence. When Birdie first hears the Song coming from her mouth, her world shatters. She is no longer simply an orphan but the last of a hunted people. Forced on the run, she must decide who to trust: a traveling peddler, a streetwise thief, or the mysterious creature who claims to know her past. With war threatening to tear her homeland apart, Birdie discovers an overwhelming truth: the fate of Leira may hinge on her song.

Songkeeper (Book 2) War ravages Leira & the Song has fallen silent. Desperate to end the fighting, Birdie embarks on a dangerous mission into enemy territory, while Ky returns to his besieged city to save the Underground runners. Legend speaks of a mythical spring beneath the Takhran’s fortress and the Songkeeper who will one day unleash it. Everyone believes Birdie is the one. But can she truly be the Songkeeper when the Song no longer answers her call?

TAKE YOUR BOOK ON AN ADVENTURE CONTEST

To celebrate Song of Leira‘s release, Gillian Bronte Adams is running a contest to show that reading and adventuring go hand in hand! Snag a picture or video of you adventuring with your book, tag it #SongofLeiraContest and post it online. Winners will be announced on June 22 at the “Song of Leira and King’s War Facebook Party.”

To see the prizes at stake and the official contest guidelines, head over to Gillian’s website.