Have another belated review from a couple of March Magics ago. XD 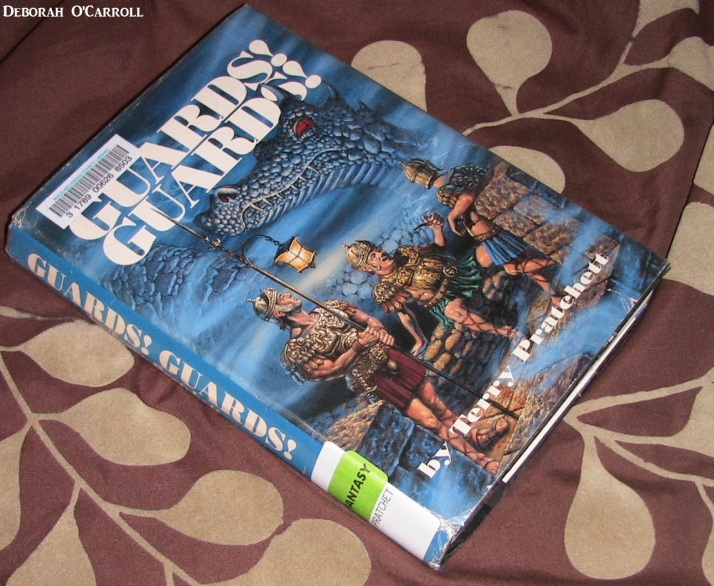 This is less of a review, and more of a things-and-thoughts-about-the-book sort of affair.

I read this one a bit belatedly for March Magics—my first Pratchett novel. People say his books are reminiscent of DWJ, and there is a reason, namely: hilarious fantasy. (I still prefer hers, but he can be fun.)

It’s hilarious and a mess and doesn’t take itself seriously, and is basically a fun rollick. XD It takes SO MANY fantasy tropes and turns them on their heads. It has footnotes. (And one of its footnotes had footnotes.) Any book that has as detailed a thing about libraries on page three as this one has is bound to be great. (Also, the librarian is an orangutan. Because it can.)

The blurb (at least the one I read) seems to act like the book is about Carrot, but it’s really about Vimes. Captain Vimes is the LAST person you’d think of as a hero or even as Main Character material. He’s the most unlikely hero imaginable. But I surprised myself by realizing by the end that I absolutely loved him! XD He’s great.

Anyway, it follows the Night Watch of the city of Ankh-Morpork, a few down-on their luck, scrapings-of-the-gutter fellows. Captain Vimes, Sergeant Colon, Nobby, and Carrot. There’s also Lady Ramkin, who is interesting; the Patrician, who is creepy; and the little dragon named Errol!! (My favorite quote about Errol: “He’d eaten most of the table, the grate, the coal scuttle, several lamps and the squeaky rubber hippo.”)

You can’t really describe the PLOT, as such… there’s just a lot of stuff going on. There’s the Watch, and shenanigans, and it’s fun. 😀

Also, silly names like the Elucidated Brethren of the Ebon Night. And helmet plumes. Also: dragons! And there’s a dash of timey-wimey to spice things up. The thing about the lost heirs!! (I kind of wish it might have turned out a little different about that character… but I don’t know if he’d have wanted that anyway, so I dunno.) There’s a bit of language/rude jokes, but still. I loved the thing about “a million to one chance but it just might work” and how people never say “it’s a certainty but it just might work”. XD There were also some brilliant things about dungeons (never build one you can’t escape from). And, of course, how people in books tend to yell “Guards! Guards!” — because they really do.

There are no chapters, just scene breaks, so it feels like a movie. This also makes it impossible to stop reading, which is awkward for those of us who need to remember to go sleep sometime.

Anyway, I enjoyed it a good deal, and this and “Mort” are probably still my favorite Pratchett books. 😀 I’ll have to try some more with the Night Watch sometime…

There is an art in throwing knives and, even then, you need the right kind of knife. Otherwise it does just what this one did, which is miss completely.

It was said that, since vast amounts of magic can seriously distort the mundane world, the Library did not obey the normal rules of space and time. It was said that it went on /forever/. It was said that you could wander for days among the distant shelves, that there were lost tribes of research students somewhere in there, that strange things lurked in forgotten alcoves and were preyed on by other things that were even stranger.*

Wise students in search of more distant volumes took care to leave chalk marks on the shelves as they roamed deeper into the fusty darkness, and told friends to come looking for them if they weren’t back by supper.

*All this was untrue. The truth is that even big collections of ordinary books distort space, as can readily be proved by anyone who has been around a really old-fashioned secondhand bookshop, one of those that look as though they were designed by M. Escher on a bad day and has more staircases than storeys and those rows of shelves which end in little doors that are surely too small for a full-sized human to enter. The relevant equation is: Knowledge = power = energy = matter = mass; a good bookshop is just a genteel Black Hole that knows how to read.

A couple of guards grabbed Vimes tentatively by the shoulders.

“You’re not going to do anything heroic, are you?” whispered one of them.

“Wouldn’t know where to start,” he said.

“Do you think picking someone up by their ankles and bouncing their head on the floor comes under the heading of Striking a Superior Officer?”

That sounded good. That sentence alone sounded worth the pay. If you had a Plan, you were halfway there.

“Oook,” the Librarian pointed out, patiently.

“What? Oh. Sorry.” Vimes lowered the ape, who wisely didn’t make an issue of it because a man angry enough to lift 300lbs of orangutan without noticing is a man with too much on his mind.

Fortunately, the chances of anyone surviving the ensuing explosion were exactly a million-to-one.

Series?: Part of the Discworld series, which frankly confuses me because there’s so many and they’re… yeah, confusing. But also book one in the Night Watch / Ankh-Morpork City Watch sub-series.

Other Notes: Read it (a week late) for the March Magics a couple years ago, celebrating Diana Wynne Jones and Terry Pratchett, hosted by Kate @ We Be Reading.