I’m joining in to help Hope Ann reveal the cover of her paperback collection version of the first three novellas in the Legends of Light series! 🙂

I’ll be reviewing it in a few weeks, so stay tuned…

Meanwhile, here’s the info and cover! ^_^

A war, founded in ancient legends, changes the lives of those it touches forever.

Elissa, a villager from the northern mountains, attempts to save her brother and ends up trapped in a hidden valley with a strange host and a treacherous enemy.

Evrard, the Wingmaster of the Prince’s army, races against his own weakening powers to discover the location of his twin and save her from deadly mistbenders.

Haydn, a pardoned rebel from Tauscher’s army, confronts shadows of myth and former comrades in his struggle to keep his sister safe and find the stolen Stormestone.

Fairy tales retold as you have never heard them before.

ROSE OF THE OATH: Beauty and the Beast
SONG OF THE SWORD: Rapunzel
SHADOWS OF THE HERSWEALD: Hansel and Gretel
and
ROSE OF THE NIGHT: a Rose of the Oath prequel

You can check out each ebook individually here or the Burning Rose page here. The Kindle version is available for preorder, but the paperback won’t be up to buy until the launch on October 3rd. (I’ll hopefully be reviewing it then, so you’re sure to hear about it. ;)) In the meantime, you can add Burning Rose on your Goodreads!

ISN’T IT GORGEOUS?? 😀 *flailing around* I love it!

Burning Rose will be coming to paperback in less than a month, and for anyone who’s on Facebook, if you’d like to keep up on tidbits and behind-the-scenes looks at the launch, you can join Readers of Aslaria launch group. 🙂 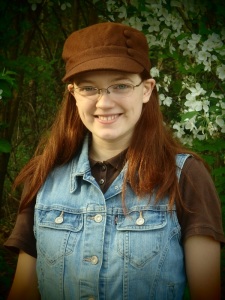 Hope Ann is a Christian wordsmith, avid reader, and dedicated author. Her time is taken up with writing, reading, playing with inspirational photos, blogging, helping care for the house and eight younger siblings, and generally enjoying the adventures of life on a small farm at the crossroads of America. She is the author of Legends of Light is currently working on several projects including a fantasy novel and futuristic trilogy. You can find out more about her at https://authorhopeann.com/

What do you think, readers? ISN’T IT SO PRETTY? 😀

Callette thinks she's the world's next famous author and she stole my seat. 😂
It's always a good day to post a pic of this awesome Celtic fantasy series by @cmbanschbach! (Largely because of my smol floof of anger management issues, Rhys/the Mountain Baron. 😁) Book one is Oath of the Outcast and this one finishes the duology and released this year!
It's my blogiversary (8 years??) so I have a post over there (link in bio) with a brief celebration and, for fun, answering some of the random search terms that brought readers to my blog. 😂
Happy cover reveal day to WISHING AGAINST THE HOUSE by @janeen_ippolito!
⚔🐉 The Silmaril Awards start today! Fantasy book character awards, this is the sixth year of the Silmaril Awards!
Anyone else ready for fall?
Do you like illustrated books?
13 years ago today, I finished writing my first novel.
One of my favorite books is free today only (Aug. 26) on Kindle! (Link in bio!)