(Yes, you get a random review from me today… I’ve posted it before on Goodreads but I may start posting older-ish reviews here on occasion. :)) 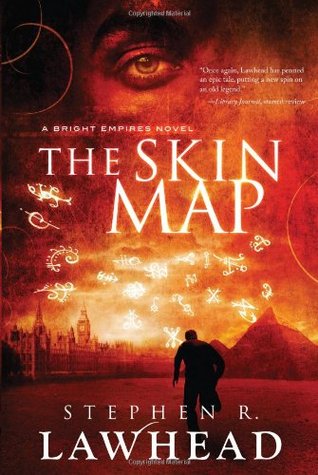 I’m giving THE SKIN MAP 5 stars . . . with one reservation (which is what this review is for, naturally).

This is going to be just a little bit hard to review. I won this book in a giveaway from Robert Treskillard (a masterful author in his own right), and read it over the course of three days when I was sick, and it helped pass the time marvelously.

For most of the book, THE SKIN MAP was a resounding 5-stars. I enjoyed it so very very much and it was brilliant and unique and fascinating and awesome and funny and perfect.

Then the last 20 pages happened and it almost lost a star or dozen because, well, not to be specific or anything, let’s just say certain authors don’t mind killing characters and I may or may not have gotten really really sad and/or devastated at something that may or may not have happened. Ahem.

That being said, if I’d rated and reviewed THE SKIN MAP the instant I finished it, I probably would have been upset enough it would not have held the 5-star rating it so richly deserves. As it was, I went to bed after finishing it, with a hole in my chest and a determination to never read anything ever again. What can I say. I’m a drama-queen when it comes to books that play with my emotions.

But I let myself cool down, and now I have to say that THE SKIN MAP fully earned every one of those five stars. Again with that one reservation, which naturally only shows how well the book was written that it made me CARE that much. I didn’t like how it was handled, though. But I will say no more because spoilers…

I must say, I was surprised by how much I outright loved THE SKIN MAP when I started it. (And still do, of course!) But from the very beginning it hooked me and drew me in and I found myself thoroughly enjoying myself. So. Much. Enjoyment.

It also felt perfectly British at the beginning there (it went on to feel like other countries too, wherein lies part of its brilliance) and I just found myself loving this story to death.

The characters were so much fun!

Following all these characters in all these different times/countries (modern-times, 1600s, and older; England, Prague, Egypt) was so much fun, so interesting, and masterfully handled. There was a particular “feel” to each section which was awesome. So well drawn!

The ley-line travel was fascinating and awesome and I can’t wait to read more about it.

Plus, aren’t those character names just delightful? I love almost everything about this book!

All in all, THE SKIN MAP is a fabulous read, full of mystery, awesome characters, and traveling through different times and localities, all richly painted in a masterful tapestry of ever-turning pages. I couldn’t stop reading, and enjoyed the whole adventure immensely.

Also I just learned that my library has all the sequels in this Bright Empires series, which makes me indescribably happy. I can’t wait to read the rest of these books and fill my life with more Lawhead brilliance.

It is the ultimate quest for the ultimate treasure. Chasing a map tattooed on human skin. Across an omniverse of intersecting realities. To unravel the future of the future.

Kit Livingstone’s great-grandfather appears to him in a deserted alley during a tumultuous storm. He reveals an unbelievable story: that the ley lines throughout Britain are not merely the stuff of legend or the weekend hobby of deluded cranks, but pathways to other worlds. To those who know how to use them, they grant the ability to travel the multi-layered universe of which we ordinarily inhabit only a tiny part.

One explorer knew more than most. Braving every danger, he toured both time and space on voyages of heroic discovery. Ever on his guard and fearful of becoming lost in the cosmos, he developed an intricate code–a roadmap of symbols–that he tattooed onto his own body. This Skin Map has since been lost in time. Now the race is on to recover all the pieces and discover its secrets.

But the Skin Map itself is not the ultimate goal. It is merely the beginning of a vast and marvelous quest for a prize beyond imagining.

Genre/Category: Well gee, how am I supposed to answer that? Contemporary / Time Travel / Fantasy/Sci-fi / Historical Fiction…

Series?: Book 1 in the Bright Empire series. Followed by The Bone House, The Spirit Well, The Shadow Lamp, The Fatal Tree. Series list on Goodreads.

Favorite Character: Cosimo. (Closely followed by Arthur. Also have a soft spot for Kit… And Wilhelmina was awesome, so…)

Source: Won in a giveaway.

Dream away in those pages!

32 thoughts on “The Skin Map by Stephen R. Lawhead”