I’m a bit late to the party, but I’m linking up with this week’s Mini Challenge for the Fantasy Love February (hosted by Grace @ Fictionally) which is to share some Fantastic Art! 🙂

(See the challenge post with the other linkers here — even join in the linkup if you like, with some fantasy art or photography or poetry or whatever! 🙂 — and read about the Fantasy Love February Reading Challenge here.)

I have no claims that these bits of fan-art are fantastic in any way other than that they are a) fan-art and, b) from fantasy books I love… but here you go. I am very rarely artistic with anything other than words, hence writing is my art of choice instead of drawing… But I do occasionally draw things, if I have inspiration. (Which is rare.) I’m also a perfectionist so I rarely consider something “finished” but oh well.

Here are a couple of fan art pieces that I drew once upon a time. (Once Upon A Time. Get it? 😀 Like… fairytales and fantasy and… Ahem. Nevermind… :P) (Also I hope it’s not cheating to not actually draw/make something this week? I really wanted to but had no inspiration and no time. *sadface*)

Achan Cham from The Blood of Kings Trilogy (By Darkness Hid, To Darkness Fled, From Darkness Won) by Jill Williamson 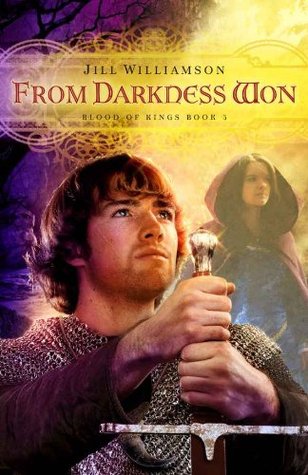 As you can see, I sketched this from the cover of the third book, From Darkness Won, just as a sketching exercise, and didn’t spend too much effort on it. (Which is why there seems to be something wrong with his nose, in particular…? Also my scanner seemed to decide it would be a great time to act up and not scan properly… 😛 My apologies.)

Achan is the hero of the Blood of Kings trilogy and just for the record he’s one of my favoritest heroes EVER.

I seriously need to reread those books… They’re really fabulous Medieval Fantasy! And if you haven’t read them, they’re definitely worth a read. 🙂

Slightly cartoonish, but I had a lot of fun with this one — not to mention it’s an oddity in that it’s one of my few drawings that actually has color!

For those who don’t know (you’re missing out!) Rakkety Tam is an awesome squirrel warrior in one of the Redwall books, and he (obviously) wears a kilt and has a Scottish accent and is basically one of my favorite Redwall characters and one of my favorite Redwall books. Though I admit I haven’t actually READ it… in that I listened to the audiobook (several times) because of the fabulous full cast and all their glorious accents. Seriously. So much awesome. Anyways he’s a fabulous warrior hero, and he’s Scottish, and he’s a squirrel, and basically what is not to love? ❤ (For those who are curious, my top favorite Redwall books are Mossflower, Taggerung, and Rakkety Tam. And they are all overdue for a reread… or perhaps a relisten?)

So there is my foray into some fantasy fan-art.

Make sure to check out the Fantasy Love February Reading Challenge (I’ve read 2 on my list so far…), and also remember that February is Fantasy Month! Jenelle Schmidt is still having some fantastic (in more ways than one) posts on her site as well. Join the fun! 🙂

*happily twirls in all of the fantasy-ness*